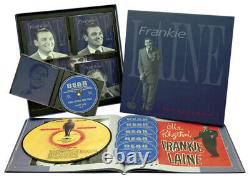 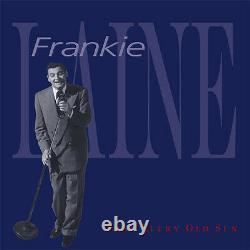 That Lucky Old Sun (6-CD & 10-inch LP Deluxe Box Set). 6-CD + 1 PD box (LP-size) with 72-page hardcover book, 153 tracks. When most young singers were trying to croon like Bing Crosby , Frankie Laine wanted to sing with the manliness and soul of Louis Armstrong, and thrill an audience like Al Jolson. Struggling through the Great Depression by working odd industrial jobs and entering dance marathons, Frankie Laine fronted a succession of small bands as he worked his way from Chicago to Cleveland to New York City and back to Chicago.

Then, on a trip to Los Angeles, he began performing an obscure old song - That's My Desire. Audiences loved it, and Frankie Laine became an overnight sensation. Now, as he approaches his 90th birthday, Frankie Laine's remarkable early career is profiled in an exclusive 6-CD boxed set plus picture disc that includes all of his Bel-Tone, Atlas and Mercury recordings from 1944 to early 1951.

Included are his original hit recordings of That Lucky Old Sun, That's My Desire, Cry Of The Wild Goose, Mule Train, Black And Blue and Shine. Included, too, are his duets with Patti Page as well as unissued takes and titles. The book features many previously unpublished photos from Frankie Laine's personal photo collection as well as striking first-person accounts of Frankie Laine's early career by fellow musicians such as Anita O'Day and Kay Starr , producers such as Harry Geller and Mitch Miller , and, of course, Frankie Laine himself. Dear customer, Based on our longtime experience, consignments to the U.

Canada, Africa, Australia, and South America may take up to three weeks, depending on the target country's custom clearance policy, and local deliverers. Such consignments are rather cheap but can not be tracked! Should you live in the U. Please, note that extra costs will apply. You must request for this extra service, prior to sending any funds.

Thank you very much for your attention and cooperation, your Bear Family Records team. The item "Frankie Laine That Lucky Old Sun (6-CD & 10-inch LP Deluxe Box Set) Pop V" is in sale since Friday, June 21, 2019. This item is in the category "Music\CDs". The seller is "bear_family_records" and is located in Holste-Oldendorf.