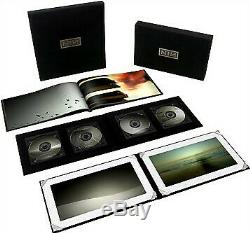 Bought on release and kept securely in storage since. No media has been played other than the records once to check they were not affected by the discolouration which plagues this run - see below. Total run of 2500, each signed by Trent Reznor. Package consists of two black fabric bound slipcases with the NIN logo on the front of each and a metal tag designating the unique number of each individual issue on the back. One slipcase contains the 4 180 gram LPs in a felt inner picture sleeve unique to this set. Their tracklisting is identical to that of the 2 CDs.

The other fabric slipcase is larger than the deluxe edition and contains an extra hardbound book containing two giclée art prints of photography from the albums associated visual art. Random prints were included on the right side while the left is consistently the image used as the album cover in all other sets.

This second case also contains a book of images identical to the one in the deluxe edition. The music book contains the standard 2CD album set, the album on Blu-Ray in 24 bit/96 kHz high resolution stereo (with an accompanying slide show) and a data DVD with multitracks for remixing. The limited edition Data-DVD has two additional ghosts tracks not found on the album elsewhere.

These two tracks are only made available as multitracks. The file format for the multitracks is 16 bit/44.1 kHz wav with each song being compressed in its own zip file. This DVD also contains the album in 320 kbps MP3, 22 wallpapers, web graphics, and the PDF file included with the web release of the album. Please Note - The vinyl records have discolored patterns, caused by the custom sleeves, that do not affect the audio quality. The item "Nine Inch Nails Ghosts I-IV Limited Edition Box Set Vinyl LP Record SIGNED" is in sale since Sunday, March 15, 2020. This item is in the category "Music\Records". The seller is "cecil1989" and is located in Melbourne, VIC.